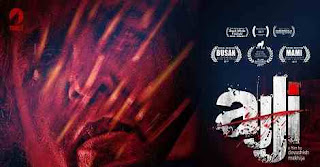 Presenting the raw and gritty trailer of the internationally acclaimed film Ajji, a dark take on Red Riding Hood. The film stars Sushama Deshpande in the titular role of Ajji, along with Abhishek Banerjee, Smita Tambe, Sadiya Siddiqui and Sharvani Suryavanshi. Its directed by Devashish Makhija.